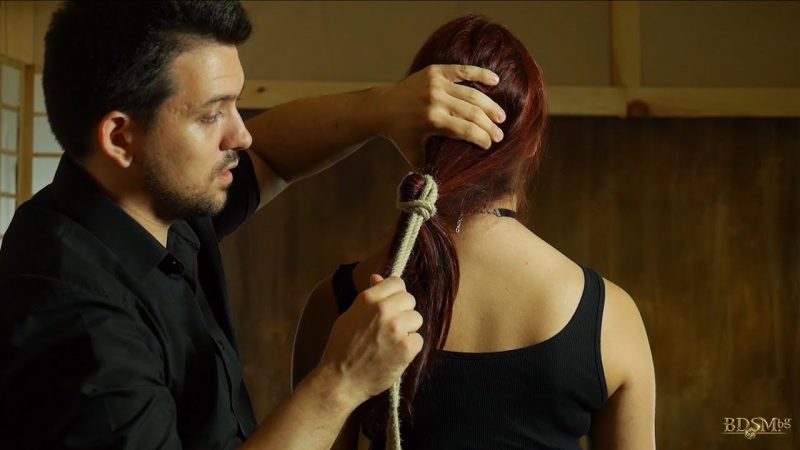 Incorporating the hair may not always be easy. The hair easily slips out of every knot you tie, unless you know how to do it right. And not every technique can be applied with every type of hair. Long hair is a lot easier to use of course. Short and extremely short hair may be a problem. In other words, you may want to experiment with different techniques a bit before you find the one most suitable for your own situation.

Tip: If you find the hair still slips out of the rope, try using hair spray first. This will make the hair less slippery and stick to the rope and to itself.

Be considerate of your submissive. If a strand of hair has been tied for any length of time, it may be hard to get it back into the normal style for a day or two – especially if it’s usually worn loose. Hence don’t do this in the event your sub has to go to work or to an important job interview the next morning.

No matter what you see on pictures and videos, there is a certain risk. Any brisk or unexpected movement may cause someone to pull out their own hair, especially if the strand used is not thick enough. Especially if you and your submissive are inexperienced, make sure you use a thick strand or an entire ponytail and never “hang” anyone inexperienced from the hair. This includes forcing someone to stand on their toes tied this way – if they fall, lose their balance or faint they may scalp themself.

Okay, now that we’ve settled that, let’s concentrate on some of the different techniques. We’ll describe several techniques here that everybody can do, without special knot tying techniques or needing special attributes.

Japanese bondage masters prefer special rice rope for this, but hemp will do just as well because it’s a bit rough. This is a typical long hair technique and the main advantage is that it can be kept in for hours or days if you like and that – once tied correctly – you can use it for a variety of different playforms. If you’re planning to use it in different forms (this goes for all forms of hair bondage) observe the pulling direction. For example, if the direction of the bondage is downward, never use it for an upward position later without changing it, since that will cause the full weight to be applied on only a part of the strand which may cause your submissive to pull parts of their hair out themself. The safest way is to put the hair in a loose ponytail at the back center of the head first.

Now what you do is you take three or four thin ropes and use them together as one rope. Lay the middle of your rope bundle behind the ponytail and wrap both ends around the tail (as TIGHT as you can) two or three times, about one-third of the length of the ponytail from the head. Next divide both the rope bundle and the hair in three strands and braid them again TIGHTLY (really try doing this as tight as you can) and go down as far as you can. When done, separate the rope from the hair and tie the rope strings together with a series of reef knots (also called square knots), tight again. You can now either use the remainder of the rope bundle (if long enough) to tie it to something else or tie another rope to the end of the braided bundle to use in the rest of your bondage.

This technique again is only suitable for long hair. Best use hemp rope again, about the thickness of a pencil. Separate a strand of hair (or use an entire ponytail) and work from the middle of the rope. Wrap it around the strand, close to the head once and make a half reef knot. Now lay the strand of hair over the knot and make another half reef knot. Wrap the rope around the strand again and repeat the procedure. Repeat this over and over again. Mind you, this takes quite a while to complete and an equally long time or more to untie again so this is not something to do in the event you only have a little time. Make sure to make your wraps and knots TIGHT and be aware that a small strand or slick hair may easily slip out, despite the number of knots. Using hair spray may be a good idea in such cases.

[Pro Tip] If you want to be extra “cruel” make the strand of hair wet before tying it this way. Especially if the hair remains tied like this for a couple of hours and dries this will cause a great “semi-permanent wave” that may last one or two days, causing a similar effect bruises after a whipping or a caning has. In other words, they’ll have something visible to remind them of the bondage for a longer period of time.

The final technique we’d like to discuss here is the use of a ring. This technique is probably your best best if your submissive’s hair is not really long and also is the simplest one if you’re not an experienced bondage master.

You can use any type of ring. Take a strand of hair, lead it through the ring and fold it around it. Make sure the part between the head and the ring is one-third of the hair and the part that’s folded back is two-thirds. Now either use thin packing rope or fishing line and wrap this around the folded strand, starting from the ring and working towards the head. When finished, fold the remaining one-third upward and repeat the wrapping, this time upwards towards the ring and finally tie the rope. Make sure your wrapping is tight as possible. When done correctly it is next to impossible that the hair will slip out of the rope and the ring, of course, can be used as a connection point for any other bondage. The possibilities are endless: from tying the submissive’s hands behind their head to fastening the ring to something else, like a wall hook or whatever other objects. The ring of course also allows for the use of quick snap hooks, so this technique is very suitable for use in combination with other things, like the leather of steel handcuffs, tackles, and similar gear. This too can be left in almost endlessly, provided the strand used is not too thin (if it is it’s likely the tension eventually will become too much.

[Pro Tip] Tie one of these rings in the hair, one on each side of the head, and the possibilities are endless, especially for humiliating positions like cuffing the hands to the sides of the head (and giving someone all sorts of tasks to perform, like serving dinner or pouring a drink – which will not only be difficult and thus humiliating, but will also automatically make them to pull their own hair which also makes a great form of “self punishment”) or to restrain someone’s head in a position for oral sex.